Football Brought Them Together, Fund-Raising Set Them Apart 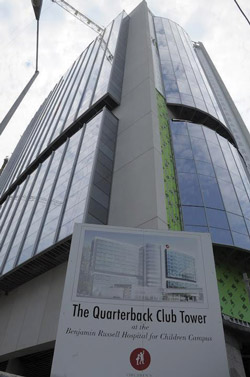 The Monday Morning Quarterback Club of Birmingham, Alabama was organized in 1939. Under the direction of Zipp Newman, then Sports Editor of The Birmingham News the club was established for the express purpose of fellowship among football lovers. This was a unique idea in light of the fact that other such clubs were generally organized for former football players.

But it wasn’t long before the club began looking beyond football. At the time of the club’s inception, polio was the number one medical concern in the U.S. The disease was rampant, striking thousands, most of whom were children. With a humanitarian desire, the club members promoted and sponsored an annual high school football game in order to raise money for a magnificent hospital to help care for afflicted children.

We are indebted to our Charter Members and Past Captains for making this great club possible. Not only do we continue to enjoy the fellowship, but serve many worthwhile purposes for others who have such great needs. This year we are celebrating our 81st Season.

Learn how football brings us together but fundraising sets us apart. Find out why we are and remain the team that never lost a game by watching this short video here: